We are very much aware today of how our actions impact the environment but the school magazines give an indication of when concerns about conservation and pollution filtered down to the general public. Climate change may have been unrecognised one hundred years ago but a weather report was included in each termly magazine. I can tell you with some accuracy that, rather similar to this month, June 1919 was dull and wet although with slightly less rain, a mere 3 cm. The highest temperature, 26.6c was recorded on the 16th, with a massive drop to 4.4.c on the 28th!

Concerns about pollution started to be expressed quite forcefully in the 1970s. In 1970, Jessica Davies, an Upper VIth student, won a nationwide essay prize on the subject of ‘Prophets’ and she included pollution as one of the world problems a prophet should highlight. Her definition of a prophet was: “someone who is outside his (or her) age in that he sees more clearly, or perhaps only differently from his companions, he is also a direct product of it, because his message is for the people of his time as well as for the future”.  The next year the school went into action over pollution, taking part in Operation Froglift, an endeavour started by a children’s programme called Magpie to rescue frogs from polluted ponds. A Sutton High School frog was used in the programme!

Twenty years later, 1991 seems to have been a key year for environmental awareness as the school decided to be proactive by collecting aluminium cans and starting a paper recycling scheme. Unfortunately, the latter petered out within two years because of problems associated with getting the waste collected although it was reinstated later on.  Awareness of holes in the ozone layer also first appear in the 1990s, albeit in a tongue-in-cheek reference about the effects of using too much hairspray. In 1996, our 2018 nominee for GDST Alumna of the Year, Dr Helen Scales, wrote about a gap year experience working in Belize on marine conservation, ending with the comment, “For me there are no three sweeter words than Tropical Marine Ecology. Watch this space!” The passion that Helen displayed for marine conservation when she was a teenager has led to a very successful career in that field today. You can read more about Helen’s work at http://helenscales.com.

The 2000s saw more acute concern and these issues appear throughout the curriculum in various subject areas. The Amazonian rainforest was witnessed first-hand in 2002 as students embarked on a World Challenge expedition to Ecuador. Year 5 may not have been able to travel that far but they had their own Rainforest Day later on.  An Environment Club was started in 2006 to raise awareness of climate change, global warming and how the individual can play her part in maintaining the environment. The members led by example, creating a memorial garden in the grounds and holding an Energy Awareness Week which reduced the school’s energy consumption by 4%. The pressing problem of the over-use of plastic bags became evident in 2009 when a group of girls in Year 12, taking part in Young Enterprise and calling their company The Paper People, made gift bags out of newspaper. The bags were so popular that they sold out of them at the Christmas music concert. They were also commissioned to make 60 for a wedding and finished by making a 200% profit for their shareholders!

Now, ten years later, the school’s newsletters illustrate how both prep and senior schools are working together to raise awareness of the twin issues of conservation and pollution. The most impressive illustration of this is the two whales, Baggy and Baguette, created from plastic bags. They cover part of the fence on the tennis courts, a visual reminder to the school community of the devastating impact of plastic waste in our oceans. 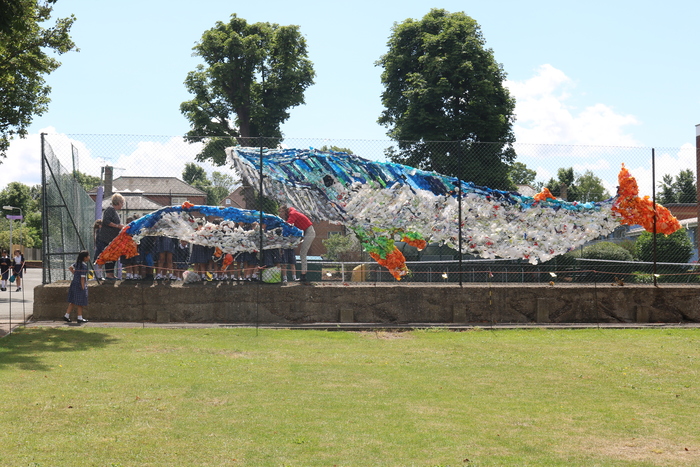 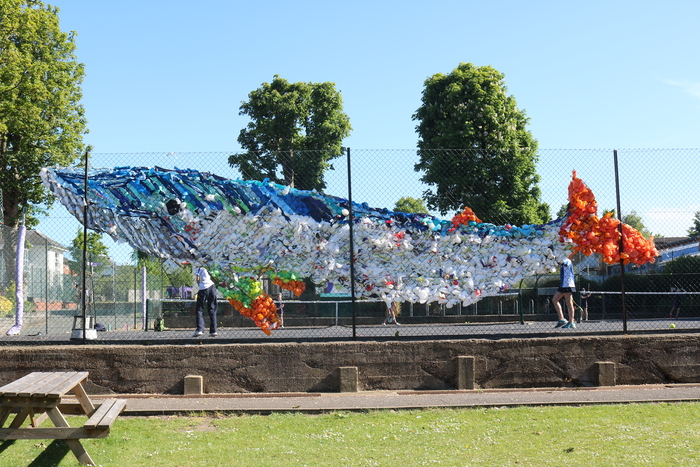 Looking back, a Year 6 student in 2002, Harriette Salvage, may have been one of the prophets that Lisa was thinking of in 1970. Let’s hope her prediction of life on earth without humans does not come true!