Summer Sports Round Up

Following Sutton High’s nomination for Best Sporting Achievement at the Independent School Awards, Mr Pettitt reflects on what has been an outstanding and very busy summer of sport at Sutton High.

Cricket in our Prep School continues to flourish with over 90 students attending regular weekly training and representing the school in numerous fixtures. 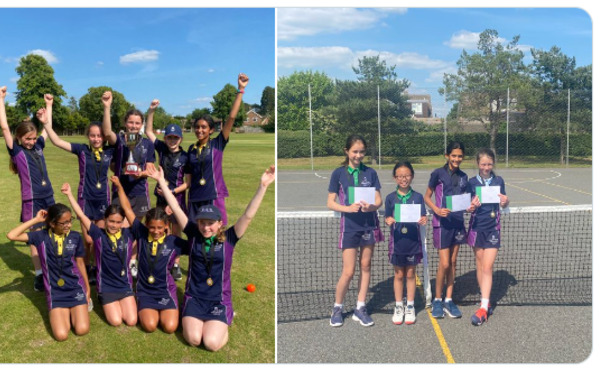 The U11 squad have enjoyed multiple achievements this season which is testament to their commitment to morning and after school training at Sutton Cricket Club. After winning the District Cup in May and A and B victories over Croydon High and Cheam Common, they travelled to Northampton to compete in the GDST Rally. After qualifying from their group with some excellent bowling and fielding displays, Portsmouth awaited in the Cup Quarter Finals. Here, the team continued their fine form and achieved an emphatic victory. Full of confidence, our cricketers met Oxford High in the final 4. After an impressive bowling display, all players batted with great skill and concentration to safely progress to the final where they would meet Putney. In the final, Sutton batted their way to a monumental score of 62 runs from their 8 overs. This was soon complimented by an accurate display of bowling and dynamic fielding to reduce Putney to 45. This meant the U11 Cricket team were crowned GDST Champions! The team are also commended for their outstanding teamwork and thoroughly excellent sportsmanship throughout the tournament.

Moving down the school, we have enjoyed fielding A-C teams in U10 cricket this season. All squads have shown great enthusiasm and focus in developing their skills and match play. In June, following some excellent results in our block fixture with Downsend, the team travelled to Beddington Cricket Club to participate in the District Cup. Throughout all five matches, the U10 squad displayed excellent focus, determination, and highly accurate bowling; especially when taking on numerous all boys teams. This led to the team winning all their group matches to progress to the final where they would face St Mary’s – a team who had also won all four matches. After an ‘big hitting’ batting display, the team set the opposition a challenging total of 65 from their 6 overs. In the field, the team performed excellently and reduced St Mary’s to 40 runs meaning our U10 cricketers were crowned District Champions.

It was fantastic to have over 25 new Year 7 students attend cricket club this season. All players have made excellent progress in their first year across all teams and are commended for their unwavering commitment to training and competition. The A team have enjoyed numerous success after only losing one game all season (by 5 runs). The season highlights came with victories over Nonsuch and Wallington in the District Cup and a nail biting 1 run triumph over Howard of Effingham in the final game of the season. Our B team have been working equally hard this year and have been rewarded with some fine results. After winning, 3 out of 4 matches this season, the team can be proud of an incredibly positive introduction to cricket at Sutton High School.

In Year 8, our U13 A and B cricket squads have built on their excellent foundations laid from Year 7 with the introduction of hardball. After a 20-run loss to Kingston Grammar in May, the A team showed resilience to bounce back with victories over Wallington and Croydon High. Buoyed by some excellent displays, the team retained their District Cup title after victory over Wallington again. The B team have remained unbeaten in their 3 matches this year. After defeating Croydon, the stand-out display came away at Nonsuch, where the match went to the final ball with Sutton needing 4 runs to win. Our batters held their nerve to guide the team to a well-deserved victory.

The Year 9 enthusiasm and commitment for cricket has been exceptional. Both U14 A and B teams enjoyed early season victories over Wallington. Confident from this, the A team entered the District Cup and matched the same feats as Year 7 and 8 to win the competition for a third year running. Many U14 players have also made the step up to the U15 squad where they have achieved unprecedented success.

The U15 cricket season kicked off with hardball victory over Wallington and an unfortunate loss to Caterham by 15 runs. The team reflected on this disappointed and bounced back emphatically during the Surrey Cup. Here, they faced a tough group of Surbiton, Wimbledon, and Wallington. Unphased, the team produced three skilful and confident displays to qualify for the knockout stages where they would first meet Putney. Putney bowled first and restricted Sutton to 72 runs from their 10 overs. The team knew that they would have to bowl accurately and make the most of any opportunities to take wickets. All players rallied to produce their most complete bowling and fielding display of the year to achieve a 24-run win. This meant the team had reach the final stages of the Surrey Cup where they would take on Emmanuel. On a sunny afternoon at Cheam Cricket Club, Emmanuel posted a score of 75 runs. Despite a good batting display, the team just fell short of their target but should be so proud of how far they went in this year’s competition. However, not dwelling on their defeat, the U15 squad matched the feats of our KS3 cricket teams to win the District Cup. This feat means Sutton High are District Cup Champions in all age groups.

The reintroduction of tennis to our programme has given 80 prep school students the opportunity to train regularly and develop their skills and passion for the sport.

Our U9 and U10 players have enjoyed a full fixtures programme and benefited greatly from expert coaching provided through our community partnership with Sutton Tennis Academy. Both teams started the season superbly win victories over St Teresa’s and Hawthorns in the Surrey League. This was followed up by a great team display against St George’s. However, the opposition just took the win in some high-quality matches. Full of confidence form this, our U9 teams then travelled to the District Tennis Event where they secured victory all but one of their matches. This was a hugely impressive feat against many all-boys doubles pairings.

In Year 6, our U11 squad have truly excelled. Following wins against St Teresa’s and a tie with Thomas’ Battersea, the team played superbly in the Surrey Cup to achieve a 3rd place finish. This was testament to their precision and speed on the court and they were unfortunate not to go all the way. In June, the team then travelled to the GDST Tennis Rally in Northampton. The standard of tennis produced throughout the day was exceptional from all players and resulted in wins against Bromley, Oxford, Sheffield, Nottingham, and Streatham in the group. Progressing to the Semi Finals, the team faced Wimbledon High where they would deliver their best performances of the day to take victory without losing a single game. The squad would meet Putney in the final, an opposition who had narrowly defeated them 5-4 in the Surrey League earlier in the season. The quality of rallies and shots on show from both schools was incredible and made for an excellent final which Putney won 6-3. A second-place finish across the whole GDST network is a phenomenal effort.

The season finale for tennis came in our intra-school tennis festival At Sutton Tennis Academy, where 50 students participated in friendly matches and games on a variety of court surfaces, such as indoor and clay. All prep tennis players should be so proud of how far they have progressed this year.

The PE department have been thrilled to see over 100 senior school students participate in regular tennis sessions on a Wednesday and Friday afternoons.

Our youngest tennis players in the senior school have loved working together their first year as a squad. They started their season with agonisingly close defeats against Claremont Fan (5-4) and Putney (5-4). Despite the losses, the team took confidence in the quality of their performances against some very good opposition. This motivated the team to take the win against St George’s and later earn a 3rd place finish in the Surrey Cup – an excellent achievement for a new squad who have such exciting potential.

The U13, U14 and U15 tennis squads have relished their returns to the Surrey League and Surrey Cup which has provided the opportunity to compete regularly in matches again. The season started very positively for all teams with victories over St Teresa’s (U15) and Croydon (U13/U14). Keen to build on this momentum the U13, U14 and U15 teams entered the Surrey Cup. The standard of tennis was incredibly high, and all teams narrowly missed out on a knockout spot despite producing their best tennis of the season.

All tennis players are praised for their dedication to training and fixtures this year in what has been a very busy term for them. The future of tennis at Sutton High School is very exciting and we are pleased to be offering 1:1 lunchtime tennis sessions through our community links with Sutton Tennis Academy from next year. 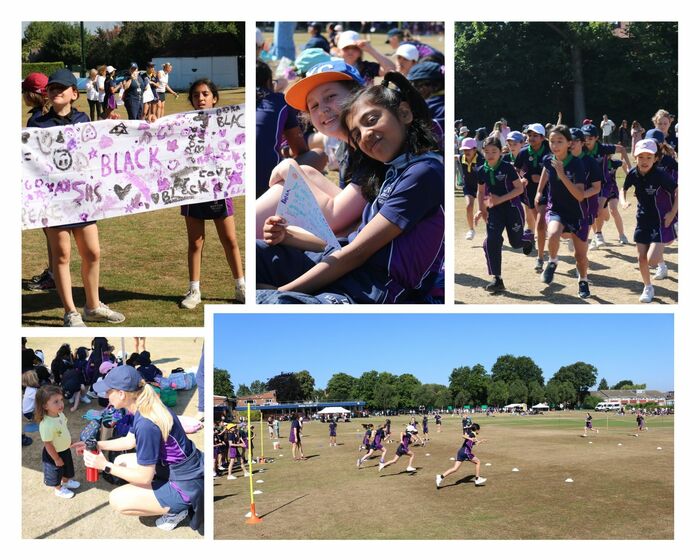 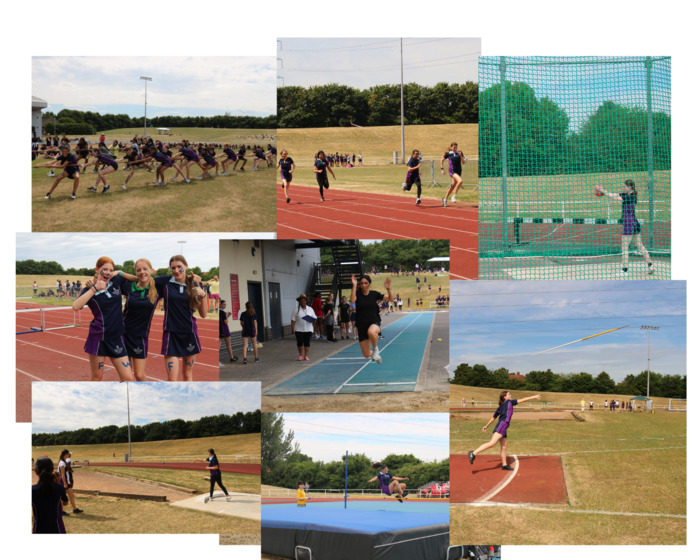 The highlights of the sporting year took place in July as we enjoyed Prep and Senior School Sports Day’s. All athletes displayed excellent techniques across all disciplines which they had learnt from their PE lessons or participation in the District and GDST Athletics Rallies. In spite on the hot weather, prep and senior school athletes gave their all and embodied true sportsmanship and house spirit throughout the day.

The PE department would like to thank all athletes for their efforts and are pleased to share the stats behind a remarkable year for sport at Sutton High.

With the opening of our new on-site AstroTurf facility from September, the PE department are so excited about what the future holds for SHS sport!

Having the best Thames in London!

Having the best Thames in London!
Read Previous

Celebrating another year of outstanding A-level results at Sutton High