The Day the School Opened

A new school year has begun with all its hopes and dreams. New items of uniform, pens and pencils, possibly various forms of technology. New classrooms, new dining area. Friendship groups being formed or re-established. Some new teachers to get to know.

January 17th 1884, the day the school opened. It was supposed to open a month or so later but, as the adaptations to the building were finished early, the date was brought forward. The school itself was just the white part of the frontage on Cheam Road, between the outside door to the study and the main entrance to reception. It was a villa called Park House and it had three stories in those days but it was still too small for the 80 children of various ages who turned up. A maid would have opened the door to them and then Miss Whyte, the headmistress, greeted the girls and their parents in a room to the right of the front door. 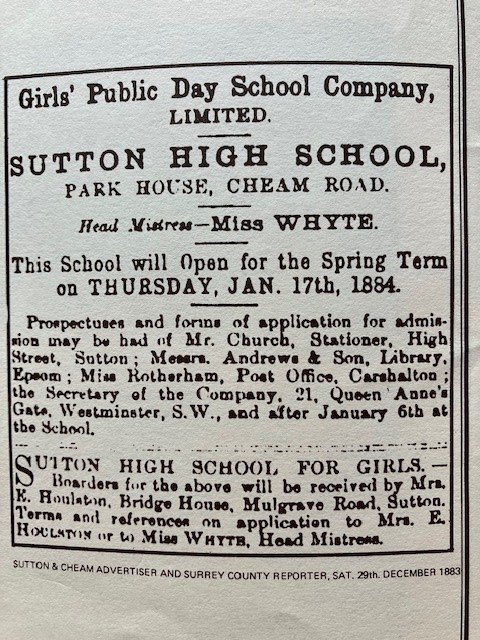 Can you imagine not knowing who was coming into the school today?  They didn’t know then and classes were put together as the pupils arrived, simply by noting down their ages and dividing them up between the seven mistresses.  There was chalk but no dusters to rub the chalk off the blackboards, no stationery, no clocks, no books!  No uniform either. Many of the girls had never been to school before and we are told by “one of the originals” that they “gazed with awe and curiosity at the large classrooms with their formal desks and various other modern appliances.” I wonder what these appliances were. We are not told.

Writing twenty-one years later, a former pupil remembered that some friendships began straight away. She wrote in the 1905 magazine: “The lunch bell had just sounded and the girls were trooping down the stairs-twos and threes and fours together-with arms intertwined and tongues busy, and with an easy air about them of owning the whole school and having owned it for years whereas it had only been open for just two hours.”

This small glimpse of life on that first day is all we have in the school archive apart from the names of the 80 girls and eight teachers, the caretaker and housekeeper.  Some things are so different from life in 2022 but I am sure that the feelings of excitement, anticipation and nervousness that those first pupils must have felt are the same for those starting school this week.

Our Girls are Taking Note

Our Girls are Taking Note
Return to