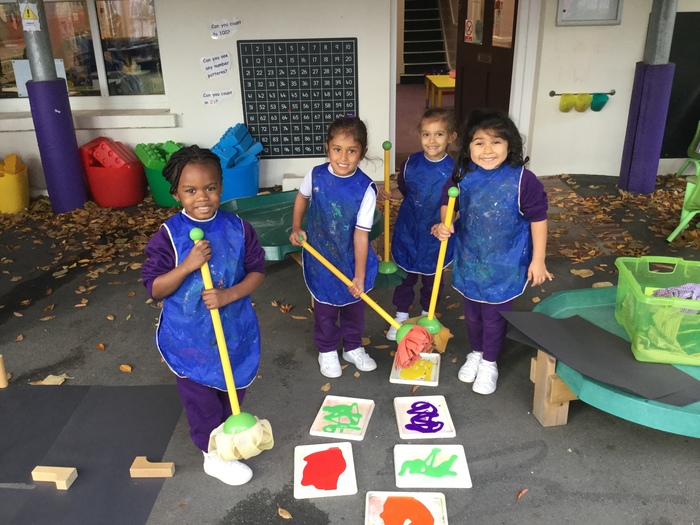 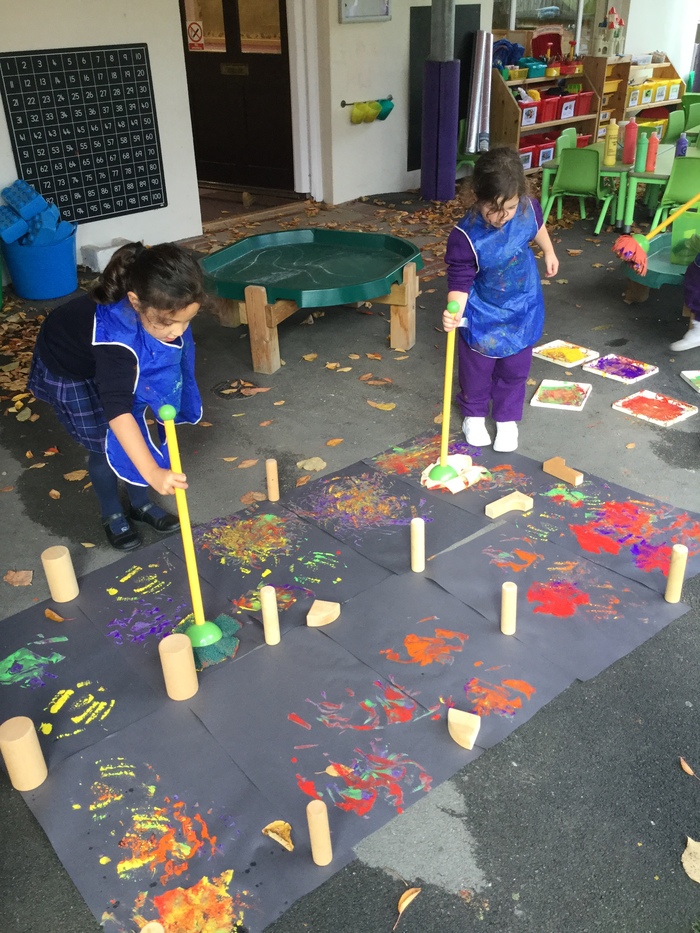 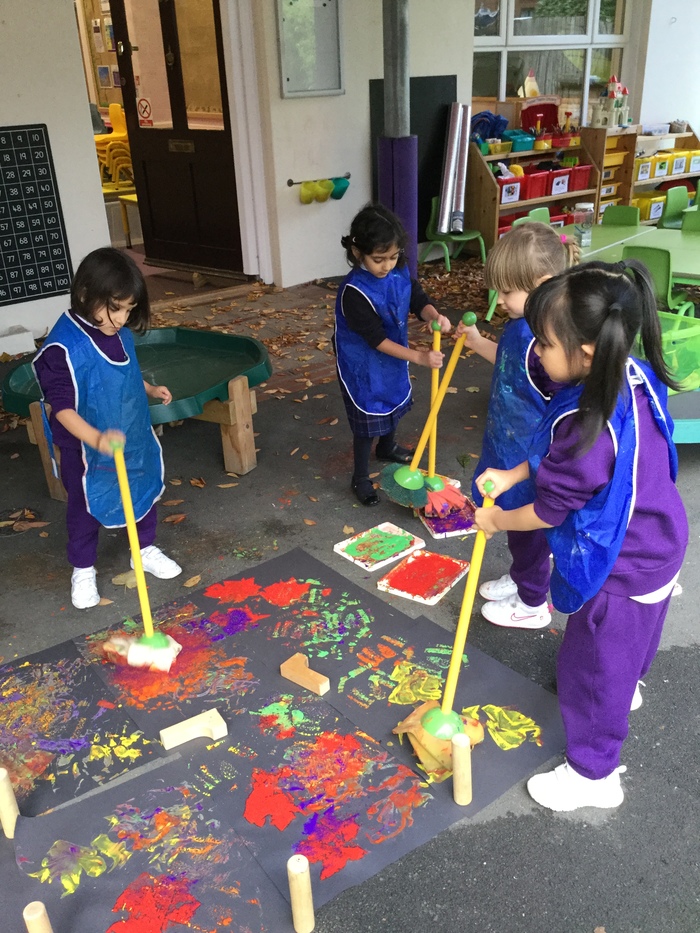 This week Reception have been intrigued by the story of Guy Fawkes. They were amazed to discover that he was real man who plotted to blow up the houses of parliament. The girls were fascinated by his story and surprised to learn the reason why we celebrate with fireworks on 5 November.

The girls discussed the fireworks they had seen at the weekend and then watched a video clip of fireworks exploding into the sky. They described the noises, colours and shapes made by the fireworks. The girls then got busy creating their own fireworks paintings. They selected large black paper to represent the night sky and then used special painting mops (dipped in brightly coloured paint) to create the different fireworks shapes. This was all topped off with a good sprinkle of glitter to make their artwork ‘pop’. 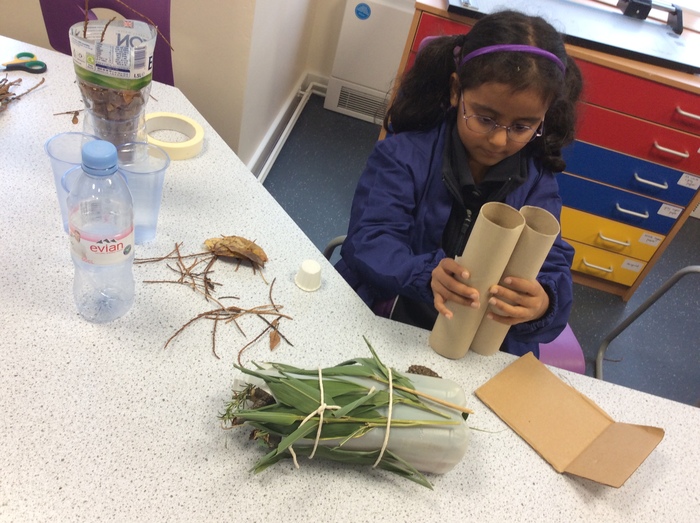 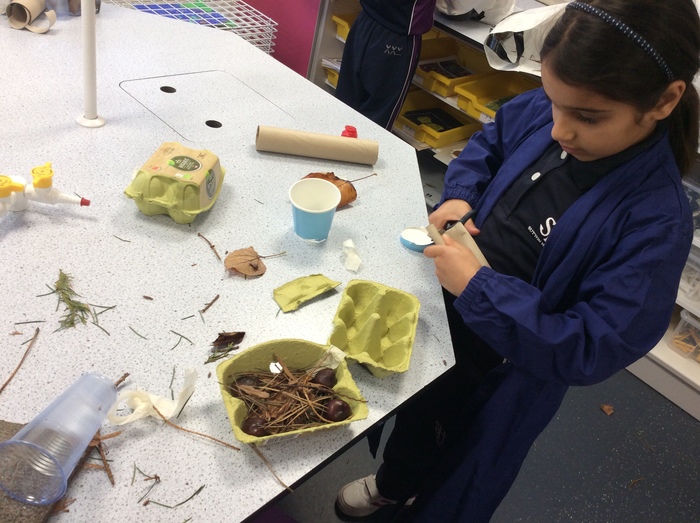 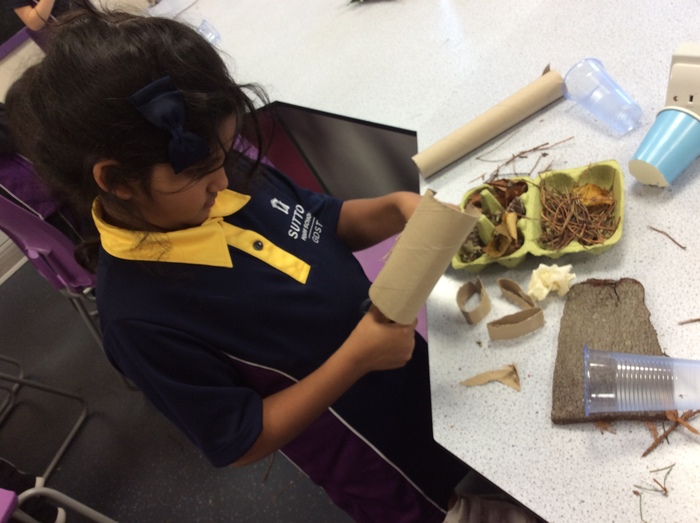 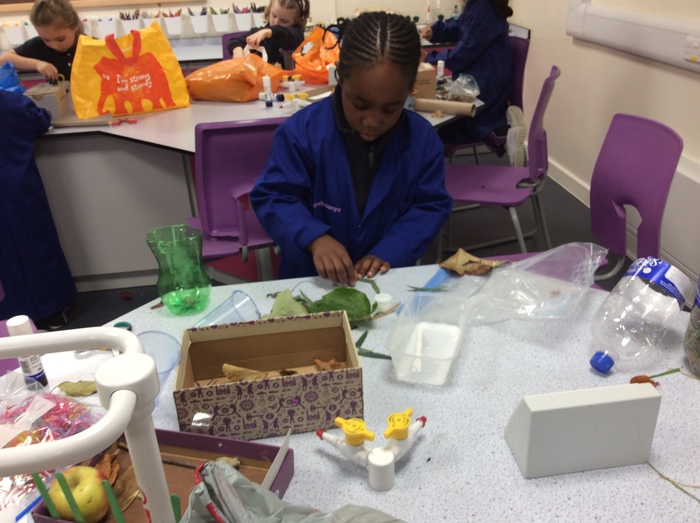 Over the past few weeks in Science, Year 2 have been learning about habitats. This week the girls were excited about making their bug hotel for small creatures to live in.  In natural habitats, there are always nooks and crannies for mini-beasts to make their homes.  With this is mind, during half term the girls collected a range of natural objects including berries, twigs, leaves, pine cones and conkers. They also collected items at home that could be reused for their bug hotel such as cardboard boxes, tubes and plastic bottles. The girls enthusiastically headed with their items to the STEAM room to begin creating their designs.  They thoroughly enjoyed making the bug hotels and thought carefully about what the creatures might like in their habitat.  Now the hotels have been completed, it will be time to go searching for bugs to fill them.  The girls are looking forward to finding a whole host of creepy crawlies to move into their hotels. 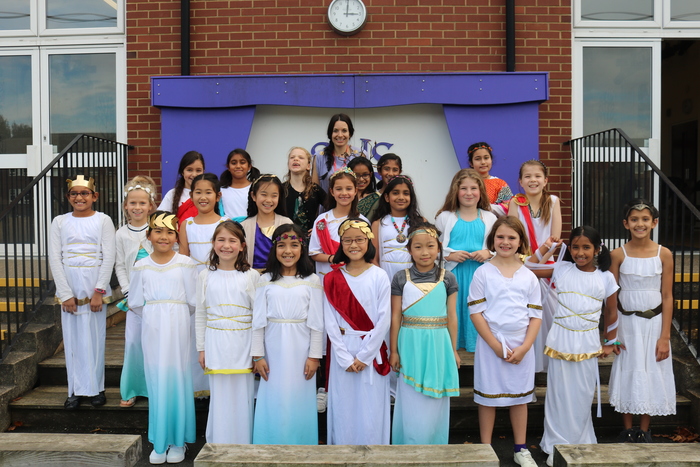 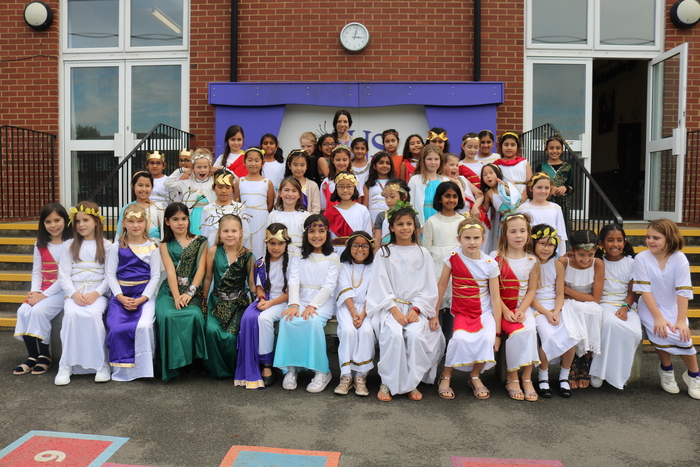 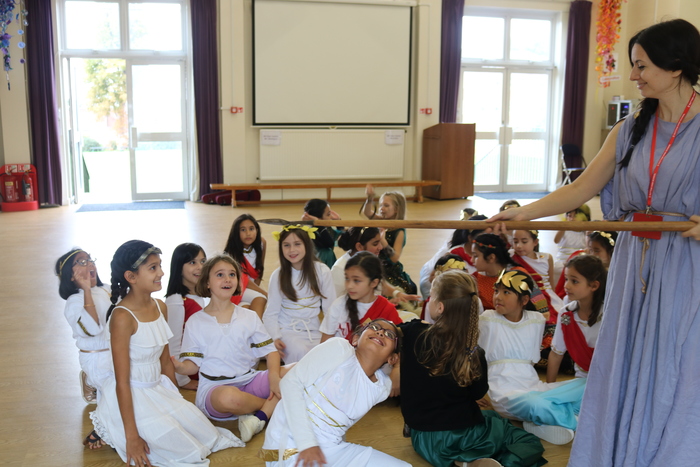 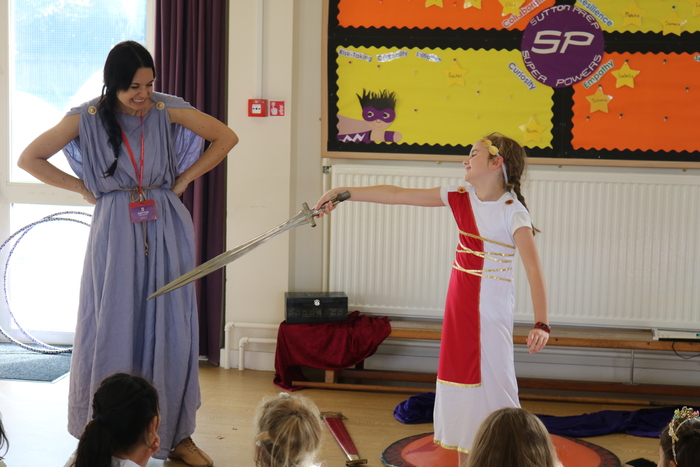 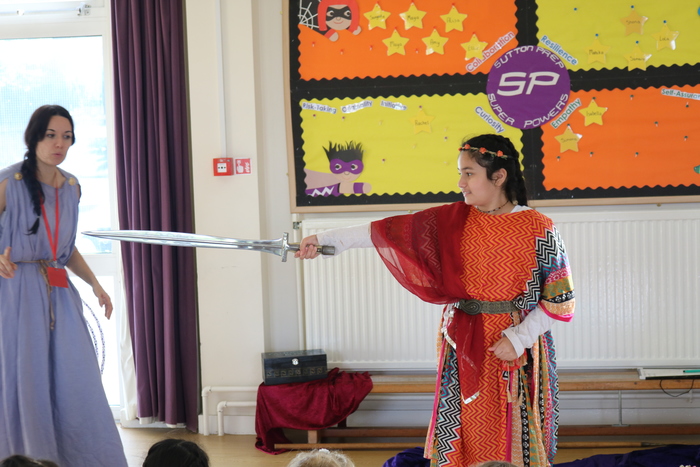 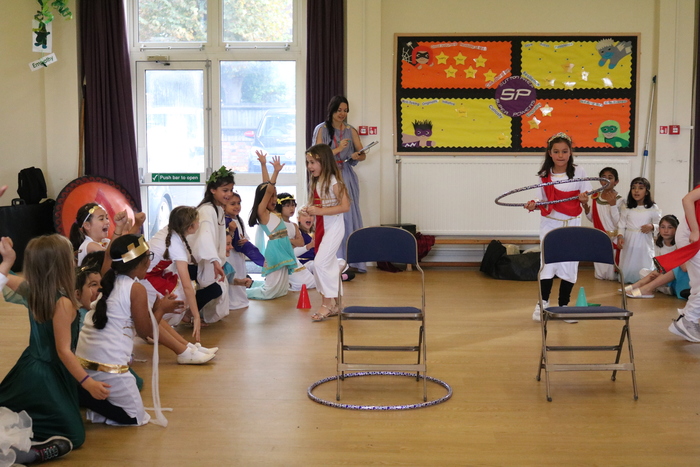 Haniya and Aanya in 4P wrote about their experiences on Greek Day, which took place on 16 October 2019.

In class, when we first saw each other’s costumes, we loved them and thought they were all great. It was like we were in Ancient Greece, instead of England! There were Medusas, gods and goddesses and normal Ancient Greek people too. Then we were ready to go down into the hall for Greek Day…

There was a lady in the hall waiting for us called Lauren and she was going to be our guide for the day. Firstly, she told us about the Battle of Marathon when the Athenian army defeated the Persians. Afterwards we did a quiz trail, finding out the answers to lots of questions about Ancient Greece.

After break we went up to the classroom where we played an Ancient Greek game similar to draughts which was called ‘petteia’. I liked playing it because there wasn’t a dice and the counters could move further on the board than in chess. It was challenging and really fun. We then completed some tangram puzzles in the hall. After that, Lauren told us the story of the Battle of Thermopylae, when Xerxes defeated the Spartans who fought very bravely but were hugely outnumbered.

During lunch, nobody could stop talking about the sequence of events planned for us in the afternoon!

After lunch Lauren said she was going to share with us, some well-known myths from the Ancient Greeks. Lauren knew so much about Ancient Greece, and her story-telling about Theseus and the Minotaur brought the story alive. We also got to enact the characters from the story.

We really enjoyed the breath-taking stories Lauren told us. After that, Lauren showed us actual Hoplite armour. Hoplites were Greek soldiers that fought in the army. There were swords and shields and helmets. They were all so heavy.

Finally, we had our own Year 4 Olympics (4P vs 4S). Our first battle was a relay race with a beanbag balanced on our head. It was won by 4S. Our next battle was a ‘hoop on through the chair’ race. 4P won this battle so it was up to the last battle to decide who the winner was.

The last battle, worth a whopping 50 points, was… a humming competition! Lauren called up two Medusas. It lasted a while but sadly 4S lost, and 4P were the winners! Everyone in 4P was delighted at this win, but we must agree, 4S gave us a tough fight.

We were enjoying the afternoon so much, we completely forgot the day was to come to an end. With smiles on our faces we left for home. 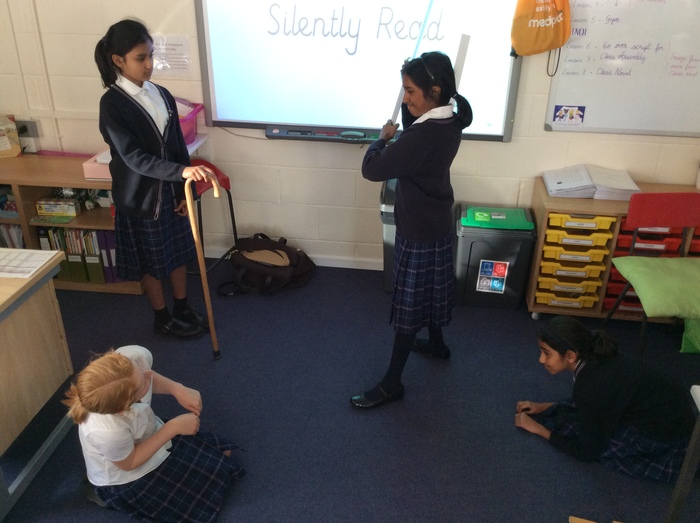 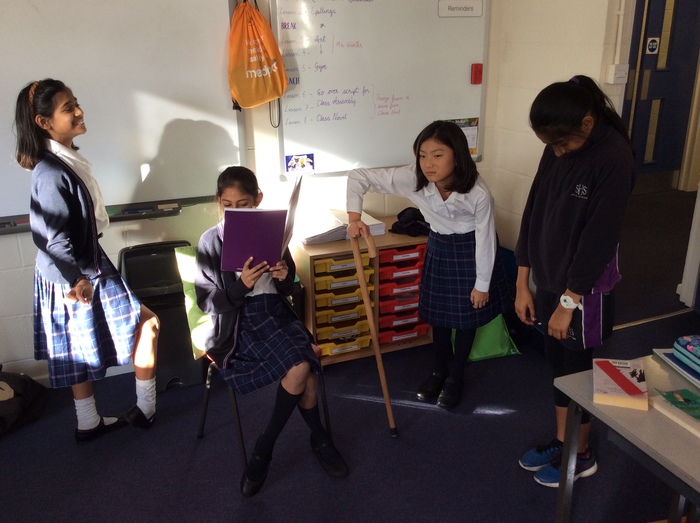 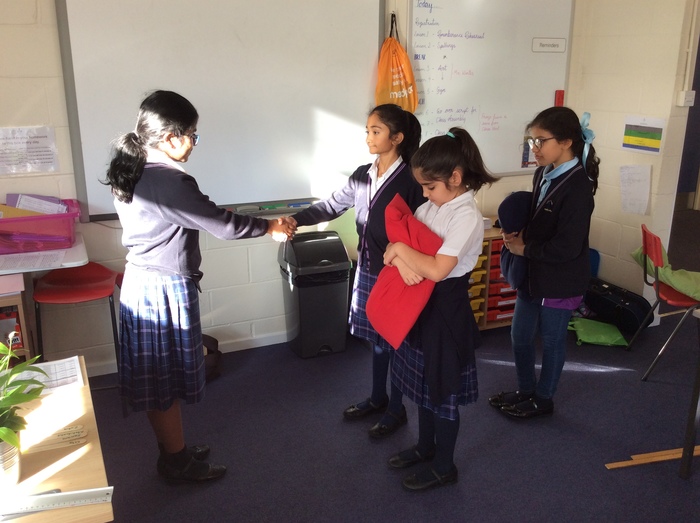 This week, Year 6 has been progressing well through our class novel, Goodnight Mister Tom and we decided to gain a deeper understanding of the story. Using our Super Learning Power of Empathy, we dramatized some of our favourite scenes we have read so far in small groups by putting ourselves in the characters’ shoes. Can you guess which scenes we were acting out in these photos? Through this activity, we realised the true range of emotions the main character, Willie, has experienced and this allowed us to imagine what he was thinking at various times and predict what might happen next. Learning so much about World War II in Humanities has allowed us to access the story and look forward to continuing it every week!

Beth Dawson takes up the Headship of Sutton High School